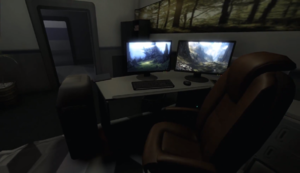 Cole Anderson's Office. This office is intended as a showcase of how the office's work and does not correspond to an actual patron or office key. 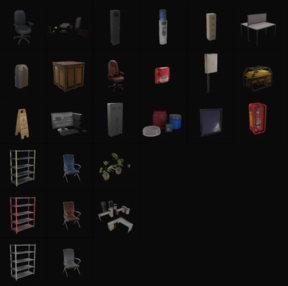 A catalog of props for patron offices as of writing.

The Patron Offices are a type of room in the Light Containment Zone in SCP: Unity. It is one of the game's many Patreon based rewards. There are currently two, one on Sublevel 1 and one on Sublevel 2.

The Patron Offices are rooms which contain several offices. These offices are random, and correspond to a patron Tier_04 to Tier_06. Each office is designed by the corresponding patron. Custom props or items may be found depending on what office spawns. A larger variety of offices can spawn if lore-friendly mode in turned off.

The Patron Office room on Sublevel 2 consists of an outer hallway, a spiral stairwell, and an upper office room. The lower area has a large lounging area with a document explaining the workings of the Patron Offices in an in-universe tone. The upper office room consists of a large base area containing a fish tank, three offices with random contents, and a larger constant office.

The Patron Office on Sublevel 1 is much larger, containing a large lounge area with a huge terrarium and a fish tank, and an upper area where six offices with random contents. An additional inaccessible constant office can be viewed through closed shutter above the entrance.

In both rooms, SCP-106 will cease to chase the player should they enter and SCP-173 cannot spawn in them, as the rooms are designated as safe rooms. The office area of the Sublevel 2 office and the entirety of the Sublevel 1 offices play unique calming music.

Out of game details[edit | edit source]

The Patron Offices are special rewards given to those who donate $35 or more to the project's Patreon. Once this is done, the donor is able to fill out a design document to describe how they'd like the offices to look. For every month after donating, the donor accrues "points" of a variable amount depending on the size of their donation. These points can be used to commission custom props for their office, which require more points to commission depending on complexity. These are requested with a similar document to that of offices. Every one of these offices has a chance of spawning at a designated location, of which there is currently only one, which contains three office spawns.

Offices are allowed to contain advertisements or somewhat unrealistic props, wallpapers and images. However, if the office contains these, said office will not spawn on lore-friendly mode.

Any office can be made to spawn in 100% of played games if the correct key is provided. Any office spawned this way will bypass lore-friendly mode.