Hello, welcome to the official SCP: Unity Wiki! This site is your #1 source for finding information about the game. Our goal is to create a accurate and detailed database of everything the game has to offer. 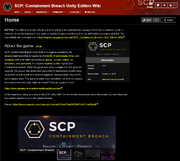 The original SCP: Containment Breach Unity Edition wikia was founded on March 23, 2018 by Ball. The wiki was recognized as the game's official wiki shortly after. The information presented on the wiki was accurate, however issues arose when spammers took advantage of wikia's comparatively unsecure registration and continuously spammed pages insulting developers and requesting SCPs, which had been rejected, to be added to the game. They also vandalized several pages, editing or creating pages for things they wanted to see in game, or sometimes just plain gibberish. VPNs prevented moderators from blocking the IPs of said spammers. Eventually, the administration got fed up with the spammers and closed commenting on September 17, 2018, however pages were still being vandalized, so the administration searched for a new platform to relocate the wiki to.

Having been fed up with the constant spam, Ball attempted to contact Gamepedia to have the wiki ported there. However, this was rejected at first. So, he went to the Zornor90 and asked if he could send a request for the wiki's creation through a developer contact. This was accepted, and so on September 28, 2018, the new SCP: Containment Breach Unity Edition wiki was created and designated the official wiki. Eventually, corresponding with a change in the game's name, the wiki was changed to be the SCP: Unity wiki.

As of now, the old wiki is still accessible here, however the information has already become outdated and it is unsupported. With Fandom and Gamepedia merging, the wiki has also been archived, making it not only obsolete but uneditable as well.